Oh, yes they did!!! Last night the Dallas Cowboys defeated the New York Giants. Who saw THAT coming??

As a general rule, you will not see anything sports-related on this blog. Today, I will make an exception. ( I forgot to bring my camera to work, so I don't really have anything else;) ) 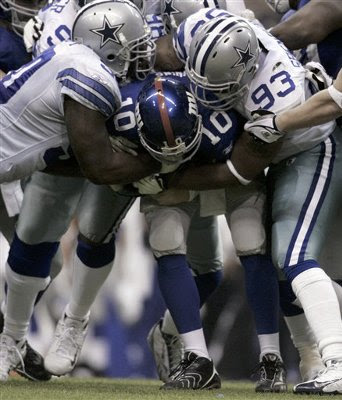 Cool Breeze has been a fan of the Cowboys since he was a small child. (I have the pictures to prove it!!) As a result of his undying devotion, I became a fan through attrition. Or was it osmosis? Brainwashing? Anyway, I pledged my loyalty to the Cowboys. For better, or for worse. (And who can resist watching Terrell Owens celebrate in the endzone?) 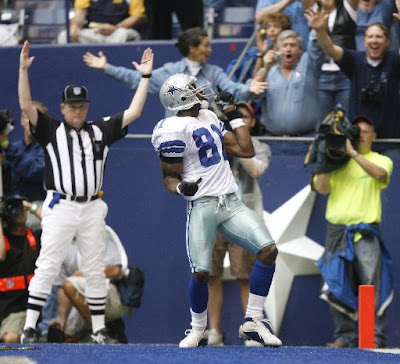 To be perfectly honest, I used to watch the games just to see Troy Aikman. (I'm SO happy that he is now a commentator:) ) Fortunately, they now have Tony Romo. Nothing like a little eye-candy to get a girl excited about a football game!

Do you have a favorite team?
Posted by Big Hair Envy at 11:15 AM

I am not happy about this at all! AT ALL! We needed you guys to lose. We are in a three-way tie for the wild card spot with you guys and the Bucs. Darn it!

It is in my marital contract that I can only like the Miami dolphins. And to think, I hate ORANGE and TURQUOISE as color choices.
We lived in Dallas for a few years and let me tell you, there are no fans like Cowboy fans. Those people are crazy about the cowboys and it made me only dislike them. sorry. :)

Oh yeah! Love me some Cowboys! Texas born and Southern by the Grace of God! GO DALLAS!!!!

For years I was a Rams fan. Ray Malavasi was a neighbor and friend..but then Georgia took the Rams away...far away. Now, I like the Chargers and the Patriots.

Giants. I don't think we can be friends any more.

I love football and I did catch some of that game last night. But, win or lose, I am a big Minnesota Vikings fan. Lots of beautiful eye candy when it comes to watching football and it's commentators...nothing like some good tight ends!

Of course I cheer for my alma mater - The University of Tennessee. And I have always been a fan of the Los Angeles Raiders.

But, honestly, I couldn't care less about sports!!

My brother has liked them since he was a child as well. The closest thing I've ever had to do with football is I was a pee wee cheerleader!

Angie, you are going to have to move aside in the number 1 fan department, (or would that be CB?). Anyway, my aunt, who lives in Ft. Worth is the hugest Cowboys fan of all time. Bar none.
heh! Now I've stirred up the competitive spirits in your household! BWAHAHAHA!
It's great that they aren't sucking as much as they have been, tho!

Hm, I don't watch football much. When I'm dating a fan, or visiting my Dad, lol. Of course, up here in Canada, we've got our own version of football. Gotta do it our own way, don'tcha know? :p

But I used to be a die-hard Atlanta Braves fan (baseball). For years and years. But then I kind of lost interest, especially after they made the post-season umpteen years in a row and only made it all the way once. Grr, my blood is boiling just typing about it!

How 'bout them Cowboys?

(That is a a COMPLETE lie. SSG knows NOTHING about football. What inning did they win in?)

I don't watch football for a couple of reasons, not the least of which is I gave up television for my blogging addiction, but I might make an exception for some eye candy. You tell me which ones to look for on which teams, and I'll be tunin' right on in.

I don't think it was attrition that forced you to watch/love the Cowboys, but rather a phenomenon known as nuptualition.

Ah, I think I need to go see what games are on tonight!

I've been a Dallas fan since I was just a wee lass. The first outfit I bought when I found out I was having a son was a little Roger Staubach jersey! Ya gotta love the Cowboys!