Yep. I got that phone call last Wednesday morning. After two years it finally happened. Snow White was in an accident. She's still completely intact (thank goodness!!). The car? Not so much. 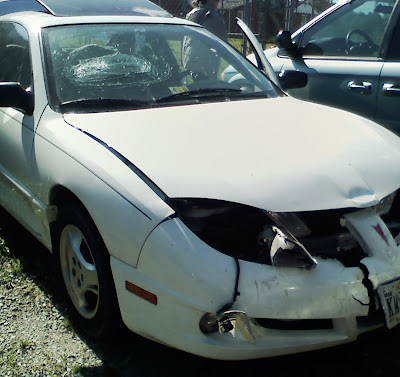 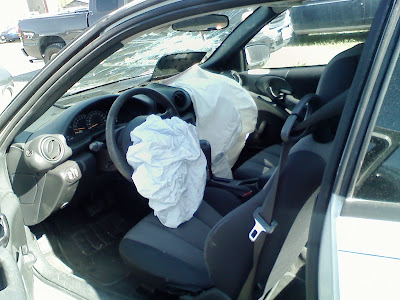 I was forty minutes away when the call came. Fortunately, her dad was able to arrive on scene within just a few minutes. He was able to calm her down, as well as handle the details with the insurance company, the tow truck driver and the body shop. Cool Breeze is my Hero of the Week!

We received word today that they have declared the car a total loss. I don't think we are going to replace the car right away. We have managed to juggle vehicles enough to ensure that we all have transportation. Besides, SW will be going to college soon and will not have a vehicle on campus her Freshman year. Seems silly to rush out and purchase something that will just sit in the driveway and increase our insurance premiums!

My thoughts on this whole experience?

-Cell phones are a necessity.
-Cars can be replaced, people cannot.
-I will never switch insurance companies because no other could possibly provide the level of customer service that we now receive.
-I probably will not purchase another small car for SW. Ever.
-Another of my "worst possible fears" has come to fruition, and I survived.
-Things could always be worse...
Posted by Big Hair Envy at 4:57 PM 18 comments: 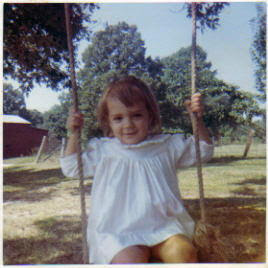 One of my favorite memories of visiting my grandparents HAS to be swinging on the rope swing. My grandfather would take two large ropes, loop them over the biggest branch of the old oak tree, and tie them together at the bottom. He would then fashion a seat out of an old plank by cutting v-shaped notches into each end and fitting it over the rope. Instant swing!

Anyone who is familiar with OLD oak trees knows that they have incredibly large roots. Once, I was showing off teaching my sisters how to swing really high and I leaned back just a bit too far. The next thing I knew, my sassy sundress-clad back was scraping across one of the biggest roots ever documented in the northern hemisphere. Lesson learned. Keep your back in the upright position when preparing for landing.

To this day, there is a homemade swing on that same oak tree. A tire has replaced the wooden plank seat, but the sentiment remains.
Posted by Big Hair Envy at 2:42 PM 11 comments: 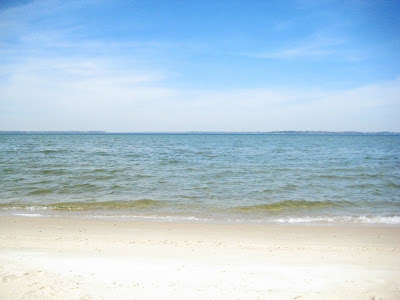 Snow White and I spent a few hours this week down at Bud's Beach. (Thanks, Bayman!!!) Those of you who attended Blog Fest '09 will remember the place. It's on Gwynn's Island, just this side of Heaven!

I spent most of my time reading and searching for sea glass, while Snow White slept peacefully on a beach blanket. Temperatures were in the mid 80's, and there was a wonderful breeze blowing off of the water. We ended our girls' day with a light lunch at the Seabreeze, and then headed home.

No matter what life may throw your way, a trip to the beach always puts things back into perspective.
Posted by Big Hair Envy at 10:52 AM 20 comments: 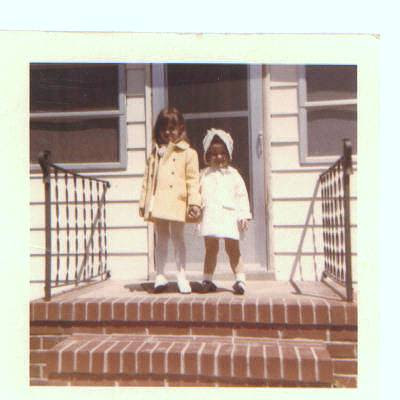 
Please Note: This photo is proof that I once had slim thighs. When I was FOUR!


I had intended to re-pot my Easter cactus over the weekend, but I was advised to wait until after it finishes blooming. AND, Snow White went away for the weekend with my camera. SO, there are no photos of the cactus. OR of Easter.

Earlier in the week, the whole family hopped aboard a jet plane at four a.m. and headed for the great state of Texas. I am not a fan of flying, but it seemed silly to take a week off from work and school to drive twenty-two hours each way for a fifteen minute audition. But that's just me.

Snow White is interested in attending Baylor University. As a voice major, one of the requirements for admission is an audition. In person. Even if you DO live 1,400 miles away. The poor child was SO nervous about auditioning. She isn't typically like that, but I believe the lack of sleep, coupled with the fact that she had a lot of time to dwell on it as we traveled, made for a bad mix.

We arrived in Dallas Monday morning, picked up the rental car and headed for Waco. Once we were out of the Dallas/Ft. Worth area, we were struck by how FLAT everything was. We could see water towers that had to have been six or more miles away. The rural areas were beautiful, and the real, live longhorns didn't disappoint!!

Once in Waco, we attempted to orient ourselves in order to avoid getting lost en route to the audition. We enjoyed a little driving tour of the Baylor campus, and were thrilled to see the bear habitat in person!! It would have been nice to spend more time on campus, but we were all operating on very little sleep, and we wanted Snow White to get some rest before the audition. SO, we checked into the hotel and slept for two blissful hours!!!

To make a very long story short, the audition went well, and we all arrived home safely Tuesday night. Snow White should get her results within the next week, and then it will be time to make a decision...

My only regret about this trip is that we didn't have enough time to see my BFF Grandma J, who lives very close to Waco. Next time, Grandma J, I promise:)

Wishing you all a very Happy Easter! I'm going to re-pot my Easter Cactus this weekend, and will have photos up Monday:)
Posted by Big Hair Envy at 10:54 AM 12 comments: